I’ve been dealing with a myriad of problems since upgrading macOS to Catalina a few months ago.

None are worse though than my bluetooth devices disconnecting 3-4 times each day, leaving me without mouse, keyboard and headphone connectivity until it rights itself after one or two minutes.

I spent the first few days Googling and considered rolling back to an earlier version of macOS. Eventually I figured it would probably just fix itself soon. Nope, not yet. This dropping connection has instead become part of my environment; it’ll disconnect, I’ll stare at an unresponsive display for a minute and then continue with my day.

I use a Logitech MX Master 2S alongside an Apple Magic Keyboard. The keyboard problem is fixed fairly easily; I can plug it in. I prefer a wireless keyboard for aesthetics, but I care more about not losing my mind so this was an easy decision to make.

Unlike the Apple Magic Mouse (which requires stabbing in the underbelly with a USB cable in order to provide power—a breathtaking design choice), the MX Master sensibly sticks a USB port right on its bow. I don’t want to use a wired mouse though. The drag is annoying, the extra moving cables are annoying and dammit why am I even having to consider this?

Those of you accustomed to wireless Logitech peripherals will know about the little USB dongle they pack into the box. You know, the third-party wireless receiver that goes straight into the bin after unpacking? They call it a Unifying USB Receiver. It looks like this: 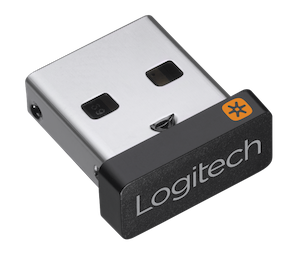 Well, I recently learned that people actually use (and like!) this thing. Recent episodes of Accidental Tech Podcast and videos from MKBHD showed clear preference for using this over a bluetooth connection.

I couldn’t fathom why, so I tried it.

Low and behold, the IR connection to this dongle is significantly better that my existing bluetooth connection. Whilst I’d noticed input lag and jankiness from time to time, I had never considered the bluetooth connection being an issue (it’s a pretty tried and tested technology, after all).

It’s been a week and the USB receiver seems to be as solid as a wired connection. Not only that, but the wireless bluetooth connection to my headphones has not dropped once since.

So thanks, Logitech. I’m happy you’re occupying one of my few USB ports.